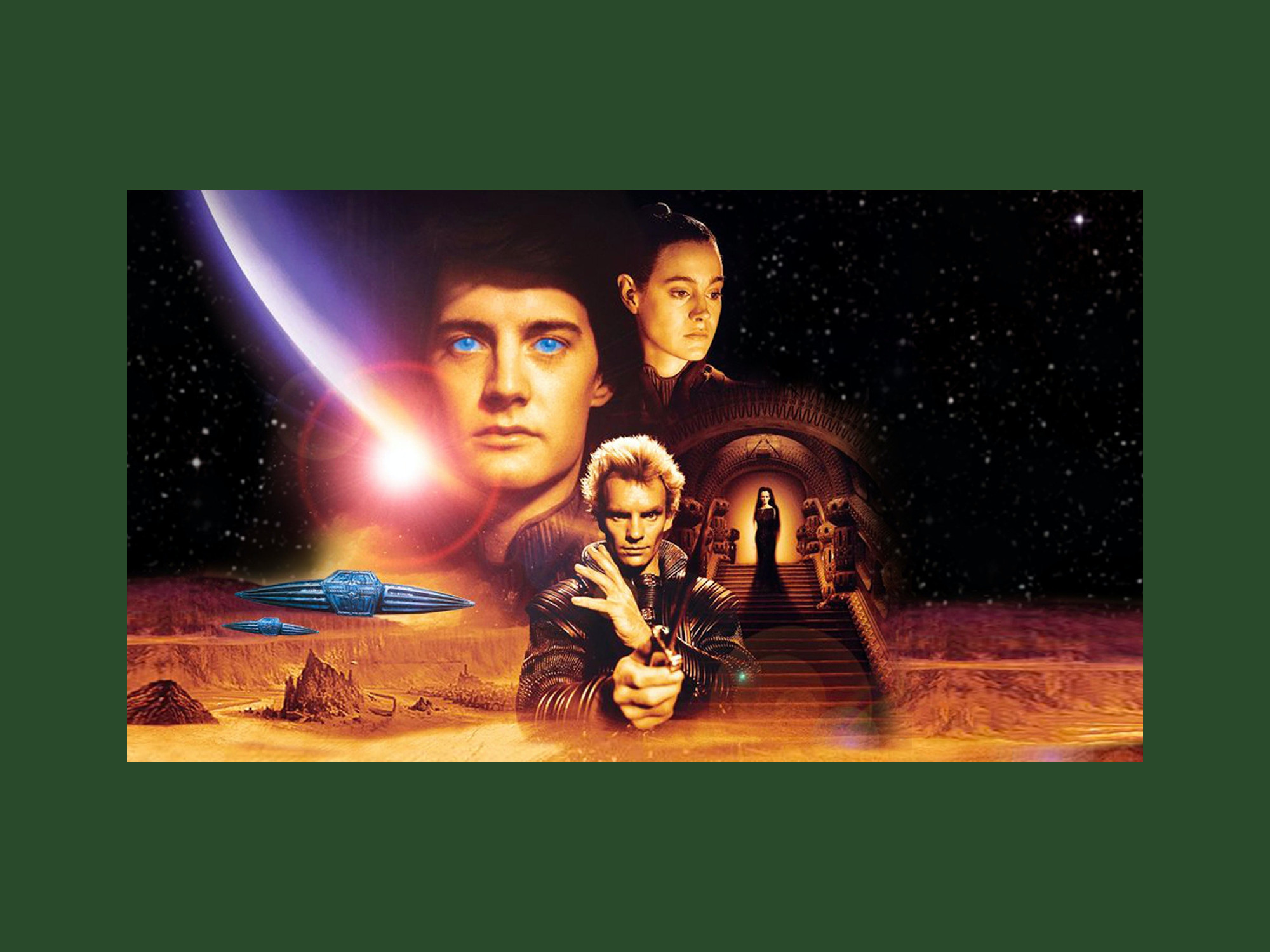 Sean and Cody, joined by film professor and David Lynch expert Mike Miley, fold space into the most bizarre Green Screen episode yet, involving an infamous 1984 science fiction epic that has polarized audiences for three decades. In this virtually incomprehensible film, spice-addicted trust fund baby Paul Atreides (Kyle MacLachlan) puts on a skin-tight rubber spacesuit and tries to avenge his father’s death by riding latex worms designed by Carlo Rambaldi and gaining control of the universe’s most valuable resource, which is apparently hallucinogenic. That’s as coherent as we can make Dune sound. Environmental issues discussed include air quality and air pollution, wildfires and their relationship to climate change, the ecological problems endemic to Mexico City (where the movie was filmed), industrial disasters and corporate malfeasance, and the environmental impact of filmmaking, especially where, as here, directors have vast financial resources at their disposal.

What’s it like to experience an AQI (Air Quality Index) of 376, literally the worst on the planet? What does this film have to do with the horrific Union Carbide disaster in Bhopal, India? How did Mexico City get its air pollution problem, the worst in the world at one time, largely under control? Why was this movie filmed on the site of a historic garbage dump? How did the production get so totally out of control? Who was the mysterious TV writer known as “Judas Booth”? Why did David Lynch spend $30 million on sets and costumes and $1.98 on special effects? What’s Sir Patrick Stewart doing with that pug puppy? Is this the worst science fiction film ever made, or an underrated masterpiece that’s the key to understanding Lynch’s entire career? All of these questions, and more, are ready to tell you about their homeworld in this psychedelic episode of Green Screen.

Trailer for Dune, re-cut and remastered by a fan. This is much better than the original 1984 trailer.

The opening scene of Dune, involving the mutant “spice navigator.” No, it doesn’t get more comprehensible than this.

A look at the chintzy special effects in Dune, especially the “shield practice.” They had $40 million to burn and this was the best they could do?

The horrifying introduction to the Harkonnens. This is the scene that drove guest host Mike Miley from the theater when he first saw the film as a kid. At least Kenneth McMillan is enjoying himself! [NSFW for violence and homophobia.]

“Long live Duke Leto!” Is this the classic image that will forever define this movie?

“I Put a Spell on You”: Affiliating (Mis)Identifications and Toxic Masculinity in David Lynch’s Lost Highway, by Mike Miley, Music and the Moving Image, Fall 2020:
https://www.jstor.org/stable/10.5406/musimoviimag.13.3.0036

A retrospective by The Economist on the 30th anniversary (2014) of the Bhopal gas disaster.

What the site of the Bhopal gas disaster looked like in 2014. This is an older shot; there is no longer Google Maps coverage of the site.

A wall of smoke from the Oregon wildfires as it approached the podcast hosts’ home, September 9, 2020. This is what 376 AQI looks like.

Sean, prepared for another wildfire smoke disaster. These things will keep happening with increasing severity as climate change continues unchecked.

The “explainer” prologue to the 1988 TV version of Dune, which clarifies a great deal. This should have been in the original version.

Brad Dourif, one of our “That Guys,” discusses his experiences in making Dune.

The poster for Dune, which is not original but has been created in recent years, is presumably under copyright but its holder is unknown to me. Its inclusion here as well as screenshots are believed to be permissible under fair use. We are not the uploaders of any YouTube clips embedded here.