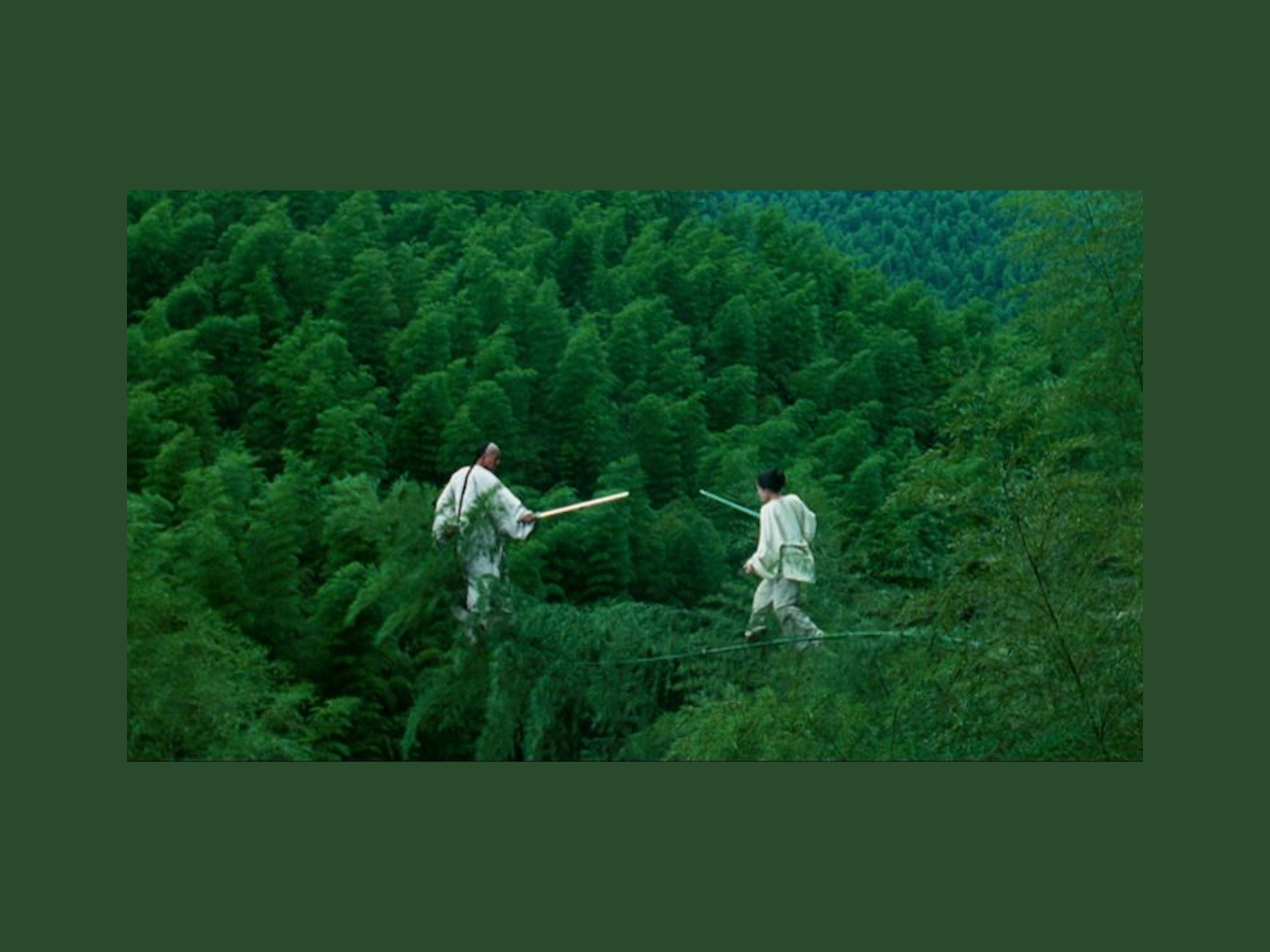 Having had enough of Libertarian dystopias for a while, Sean and Cody are ready to zen out in late imperial China and break themselves emotionally with another Ang Lee-directed drama, Crouching Tiger, Hidden Dragon, a multinational Chinese-language production from 2000. When Green Destiny, the magic sword once owned by martial arts master Li Mu Bai (Chow Yun Fat) gets filched by a masked bandit who’s apparently secured an exemption from the laws of gravity, Li and security consultant Yu Shu Lien (Michelle Yeoh) go off to get it back. In the meantime, spoiled brat Jen (Zhang Ziyi) is still hopelessly stuck on her ex, the dashing Mongol bandit Dark Cloud (Chang Chen). These plots do come together, leaving not a dry eye in the house. Environmental issues discussed include hunting, frontier settlement and ethnic environmentalism in Qing Dynasty China and the lavish landscapes seen in this and other Chinese martial arts pictures.

Why are the Qing (Manchus) so crucial in the environmental history of Asia? What happened to all the tigers in China? What’s the deal with those funky hairstyles on all the men? What’s the difference between “Inner” and “Outer” Mongolia? Did the Chinese have a western frontier analogous to what existed in the United States? What does the title of this film mean? Why does the story of the author who wrote the book this film is based on sound like it would make a really great movie in its own right? Is this the saddest film we’ve ever done on the show? Is the world ready for Sexy Dr. Yueh? All these questions and more are dancing in the crowns of the bamboo forest in this deeply philosophical episode of Green Screen.

The scene early in Crouching Tiger, Hidden Dragon where the “Green Destiny” sword, the film’s chief MacGuffin, is stolen exhibits some of the masterful martial arts mastery, including that by actor Michelle Yeoh.

Jen (Zhang Ziyi) has a “meet cute” in the Gobi Desert with ferocious outlaw and bandit Lo, also known as “Dark Cloud” (Chang Chen), setting up what turns out to be the main story arc in Crouching Tiger, Hidden Dragon.

The arrogant Jen treats a local tavern to a display of her martial arts prowess. While this scene is played mostly for laughs, the quality of the martial arts remains consistent throughout the production.

The incredible bamboo forest fight in Crouching Tiger, Hidden Dragon, along with its sad ending, is the scene everyone remembers. If there was a video reel of highlights from the Green Screen podcast, this clip would be in it.

The History and the Environmental Issues

J. Devine, “The Qing Dynasty and the Borderlands: The Cost of Expansion into Manchuria and Mongolia,” Environmental China, class project at Loyola Marymount University, Spring 2019:
http://environmentalchina.history.lmu.build/qing-dynasty-expansion/

James Reardon-Anderson, “Land Use and Society in Manchuria and Inner Mongolia During the Qing Dynasty,” Environmental History, Vol. 5, No. 4 (October 2000):
https://academic.oup.com/envhis/article-abstract/5/4/503/482834?redirectedFrom=fulltext

Wang Dulu, the author of the series of novels on which Crouching Tiger, Hidden Dragon is based. He died in 1977, but his widow met and conferred with Ang Lee and Michelle Yeoh during the making of the film.

Trailer for the 1971 Taiwanese film A Touch of Zen, directed by King Hu, which was a major influence on Crouching Tiger, Hidden Dragon.

The bamboo forest scene in Crouching Tiger, Hidden Dragon owes much to this, a similar sequence in A Touch of Zen.

The still associated with Crouching Tiger, Hidden Dragon is copyright (C) 2000 by Sony Classic Pictures. Its inclusion here is believed to be permissible under fair use. We are not the uploader of any YouTube clips embedded here.