Back from the chilly forests of medieval Japan, Sean and Cody put on their COVID-19 resistant shemaghs and saddle up the camels for a dusty trip into the desert and the heart of one of the most beloved and acclaimed films of all time. In David Lean’s 1962 epic Lawrence of Arabia, pasty British white guy Lawrence (Peter O’Toole) gets sent by khaki-wearing, cocktail-sipping sahibs to scope out the hottest new guerrilla commander in Arabia, Faisal (Alec Guinness in brownface), and see if he’d be up for a bit of Hulk-smash action against the Ottoman Turks, which, of course, he is. The result is an almost 4-hour spectacle atomic-powered by the greatest score in movie history. Environmental issues include the ecological impact of World War I, how desert environments and control of water shapes history and cultures, Western colonialism, and many more.

What effect did the First World War have on the global environment? How is an oasis formed? Can you really sink to your death in quicksand? How about a muddy shell crater? Was the real T.E. Lawrence queer, a sadist, or both? Why did he go around dressed like Jesus? Why is the score to this film so iconic? How do you pronounce the composer’s name? What’s up with Anthony Quinn’s terrible latex nose? Why would this film have been particularly terrible if it was made by the wrong people? Can we give the film a pass on some of its more problematic aspects because it’s just so fricking amazing? All of these questions are raised up on the seven pillars of wisdom in this latest episode of Green Screen.

Special thanks to Mark Aitken for permission to use his cover of the Lawrence of Arabia theme.

Trailer for the restored Lawrence of Arabia.

The Okra Project, a charity to help the Black Trans community (mentioned at the beginning of the episode). They could use your donations:
https://www.theokraproject.com/

Website of Mark Aitken, composer who performed the cover of the theme used in this episode:
https://markaitkenguitar.com/

Here is the satellite view, items circled are likely the train parts: 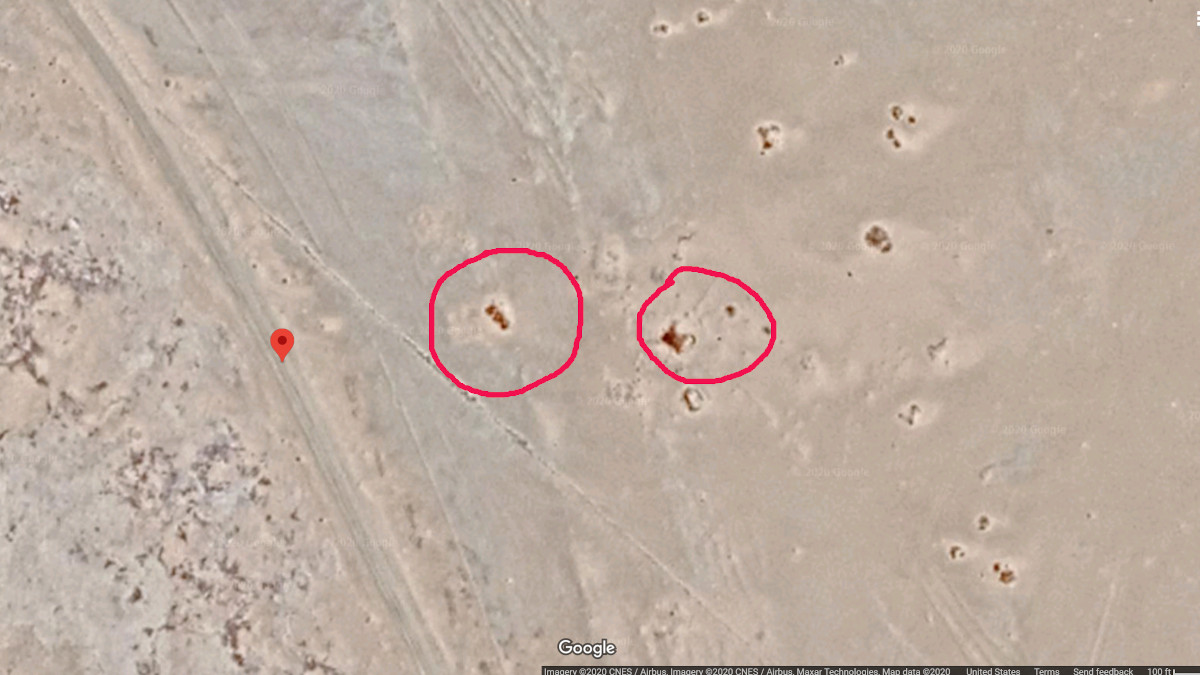 Recording session in 2010 for the restoration of Lawrence of Arabia.

Composer Maurice Jarre reflects on the process of scoring Lawrence of Arabia.

Jennifer Hambrick’s article for WOSU Public Media on the score of the film:
https://radio.wosu.org/post/soundreels-desert-fun-maurice-jarres-score-lawrence-arabia#stream/0

Groovy History’s analysis of the history of quicksand in movies, especially in the 1960s:
https://groovyhistory.com/quicksand-facts-movies-tv-history

A gallery of white actors in brownface. Left to right: Rex Harrison in King Richard and the Crusaders (1954); Laurence Olivier in Khartoum (1966); Sean Connery in The Wind and the Lion (1975); Brendan Gleeson in The Tailor of Panama (2001).

The screenshot from Lawrence of Arabia is presumably copyright (C) 1962 by Columbia Pictures. Its inclusion here is believed to be permissible under fair use, as are screenshots from other productions. We are not the uploader of any YouTube clips embedded here.